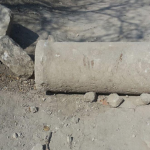 The Samaria National Park (Sebastia), site of the capital of Israel for 150 years, was found with Roman columns broken and turned into roadblocks, uprooted seats in the amphitheater and Arabic graffiti sprayed on many ancient stones.

The Samaria National Park (Sebastia), some 10 kilometers north of Nablus, was found to have been vandalized with graffiti in Arabic, an ancient marble column toppled, a smashed tombstone and the remains of burnt tires discovered. The Samaria visiting and learning center organized a tour of the site for journalists to show the site’s degradation. 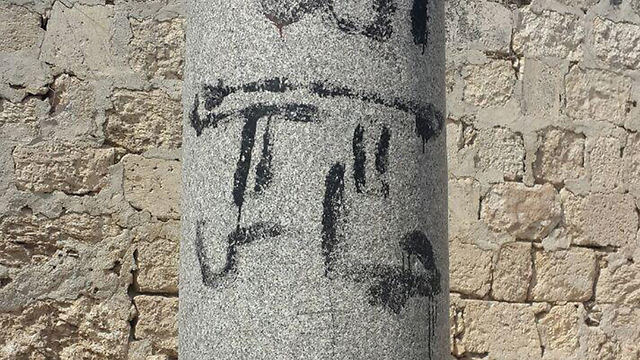 The Samaria Regional Council protested that a Palestinian flag had been hoisted inside the park. Continue Reading »

Graffiti at the security checkpoint notes that the vandalism was ‘retaliation’ for Israeli security personnel killing wanted Arab terrorist as incitement after funeral continues.

Masked Palestinian Arabs broke into a IDF checkpoint near the Palestinian Authority (PA) settlement of Beit Furik, northeast of Shechem, after they cut through barbed wire fence surrounding the post.

A video surfaced on YouTube over the weekend showing masked men, who were armed with a chainsaw and hammers, sawing through checkpoint gate, smashing the windows of the armored guard position, and vandalizing the checkpoint. Graffiti at the site read, “Boycott Israel, in memory of the martyr Motazz Washaha.” Continue Reading »

Group Fights to Save British Mandate Site from Arab Construction

A historic site in the Binyamin region north of Jerusalem may be destroyed if Israel’s courts do not intervene, the Regavim organization has warned. The ancient structure of Khan Lubin is located near the Israeli town of Maaleh Levona. Residents of the town and other nearby communities have made an effort to preserve the site over the years.

However, in recent months Palestinian Arabs have increasingly been coming to the site, and, Regavim warns, have been doing damage to the ancient structure. Continue Reading »

Two mezuzot (cases containing Jewish holy scriptures affixed to the doorpost) had been torn off & stolen, and a 3rd was damaged at the Tomb of the Patriarchs, Judaism’s 2nd holiest site.

Jewish worshippers who arrived at the Cave of Patriarchs in Hevron after Muslim prayers on Friday were horrified to find that the site had been vandalised. The Cave (known as Me’arat Hamakhpela in Hebrew) is usually split between Jewish and Muslim worshippers, but this past Friday it was open exclusively to Muslim worshippers in honour of Ramadan. Continue Reading »

The University says they reserve option to take legal action against female Muslim vandal who ripped down parts of an Israeli graphic novel art exhibit.

By BENJAMIN WEINTHAL, JERUSALEM POST CORRESPONDENT
BERLIN – A female Muslim student at the University of Duisburg-Essen ripped down parts of a graphic novel exhibit, which included the work of the internationally known Israeli artist Rutu Modan. 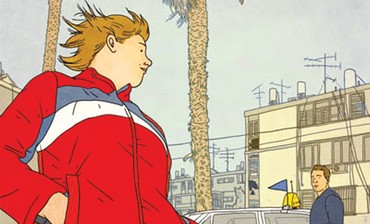 In a commentary in the left-liberal website Taz on Thursday, journalist Pascal Beucker attributed the June 24 attack on the exhibit “to an anti- Israel, if not anti-Semitic, motive.”