According to Bethlehem-based news agency Ma’an, Palestinian Authority (PA) chief Mahmoud Abbas will ask French president Francois Hollande to recognize the “state of Palestine” when Abbas meets Hollande in France Friday. According to the report, Abbas will then ask additional European countries to recognize “Palestine” even before he heads for the annual United Nations General Assembly.

PA foreign minister Riad Al Maliki told Ma’an that “the international situation now is much better than in the past, and there is a better chance that the Palestinian people’s demands will be met.” Continue Reading »

Israel has denied entry permits to some 50 Palestinian medical patients from the Gaza Strip because the words “State of Palestine” appears on the letterhead of their application, officials said on Wednesday.

Suhad al-Katib, a Palestinian woman patient who suffers cancer sits inside her house after she was not allowed to enter Israel, in Gaza City February 12, 2014.- Photo: Reuters

Israel does not recognize a Palestinian state, whose creation it says should stem from peace negotiations. Continue Reading »

Muslim scholar from Jordan attacks Israel’s ‘Palestinians’ for distorting Koran, saying the Jews given Israel ‘until Day of Judgement’ and that ‘Palestine doesn’t exist’.

Allah has promised Israel to the Jews — so says Sheikh Ahmad Adwan, a Muslim scholar living in Jordan, who declared on his Facebook page recently that “Palestine” doesn’t exist.

Blogger Elder of Ziyon translated Arab news sources that this Saturday reported on Adwan’s statements, in which he quotes the Koran saying Allah assigned Israel to the Jews until the Day of Judgement (Sura 5 Verse 21), and that Jews are the inheritors of Israel (Sura 26 Verse 59). Continue Reading »

Young Palestinians who are fed up with the existing leaders’ attempts to establish an independent Palestinian state launched their own initiative designed to give the young people a voice in determining the Palestinian future. 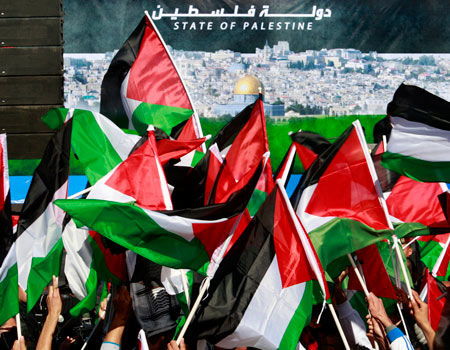 Several Palestinian entrepreneurs launched NEWpal, a youth group based in Ramallah, which got started this week by hosting a full day “Future Palestine” conference.

Six cities, two airports, a high-tech complex, a university and a system of highways to connect all of the above are included in the new Palestinian construction plan aimed at setting facts on the ground and creating a territorial continuity in the West Bank.

Dozens of sites in the West Bank are part of the new trend of construction, as the authorities refuse to wait for the revival of peace talks and are laying down the foundations and infrastructures for an independent state. Continue Reading »

The Palestinian ambassador unequivocally says that Palestinian refugees would not become citizens of the sought for UN-recognized Palestinian state. “They are Palestinians, that’s their identity,” he says. “But … they are not automatically citizens.”

By Annie Slemrod of The Daily Star

BEIRUT: Palestinian refugees will not become citizens of a new Palestinian state, according to Palestine’s ambassador to Lebanon.

From behind a desk topped by a miniature model of Palestine’s hoped-for blue United Nations chair, Ambassador Abdullah Abdullah spoke to The Daily Star Wednesday about Palestine’s upcoming bid for U.N.

Internet giant Google took a symbolic step this week, changing the tagline on the homepage of its Palestinian edition from “Palestinian territories” to “Palestine.” 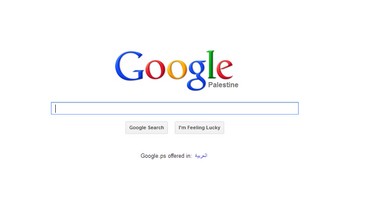 The move marks another victory for the Palestinian Authority, after it won a historic upgrade at the United Nations General Assembly in November, gaining the status of non-member observer state. Following the vote, the PA officially changed its name to the State of Palestine, with stamps, signs and letterheads reflecting the decision.

“We’re changing the name ‘Palestinian Territories’ to ‘Palestine’ across our products,” Google spokesman Nathan Tyler told the BBC on Friday.

State of Palestine not to be written on ID or Passports

Declaration of Palestinian ‘State’ is one thing, but Mahmoud Abbas refrains from issuing new passports or IDs fearing Israeli retaliation

With UN recognition of a Palestinian state in his pocket, President Mahmoud Abbas wants official documents to carry a new emblem: “State of Palestine.”

But scrapping the old “Palestinian Authority” logo is as far as Abbas is willing to go in provoking Israel. He is not rushing to change passports and ID cards Palestinians need to pass through Israeli crossings.

“At the end of the day, the Palestinian Authority won’t cause trouble for its people,” Nour Odeh, a spokeswoman for Abbas’ self-rule government, said of the need for caution. Continue Reading »

PA President Mahmoud Abbas officially signed his first decrees that bear the name of the State of Palestine on Friday, according to WAFA, in an apparent move to reflect the recent upgrade of the Palestinians’ status to non-member observer state at the United Nations.

Palestinian stamps, signs and letterheads will be changed to reflect his decision, WAFA reported.

Also on Friday, tens of thousands took to the streets in Gaza in a demonstration marking 48 years since Fatah’s founding.

Only after the creation of a Palestinian state within the pre-1967 lines would a confederation  be considered, says PA officials.

Palestinian Authority officials confirmed Thursday that they were studying the possibility of establishing a confederation with Jordan, but stressed that this would take place only after the creation of an indecent Palestinian state within the pre-1967 lines. 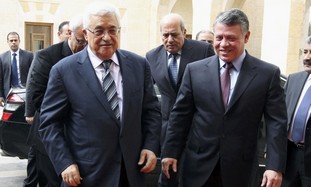 The officials were commenting on a report in the London-based Al-Quds Al-Arabi newspaper that claimed that Abbas had asked senior Fatah leaders to prepare for the formation of a confederation between a Palestinian state and Jordan.

Analysts point out that the Palestinian leaders now have little incentive to hold bilateral talks, and even less reasons to make any compromises in ‘the quest for peace’. No need to ‘negotiate’ when the int’l community will impose their will on Israel.

Eager to turn their victory at the United Nations last month into facts on the ground, Palestinian Arabs have begun posting official-looking signs on roads throughout Judea and Samaria delineating the new “State of Palestine.”

Under a bold headline of “Warning” the signs state in English, Arabic and Hebrew that the visitor is now standing on “illegally occupied land. Continue Reading »