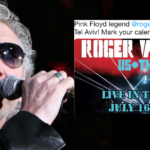 Fans of antisemite Roger Waters urged the British rock legend to cool down, and take a joke after he launched into an angry, vulgar rant on social media when the Israeli government succeeded in pulling off an April Fool’s joke on him.

From Germany to the UK to France to America, it is now common to hear top world leaders equate hatred for Israel with antisemitism. And, if that’s the case, then there are few bigger antisemites in the world than former-Pink Floyd frontman Roger Waters.

For years, Waters has strongly advocated a total boycott of the Jewish state, and has urged and even demanded that other artists follow his lead in championing the “Palestinian cause.” Continue Reading »

Artists’ letter calls for boycott of 2019 Eurovision contest in Israel 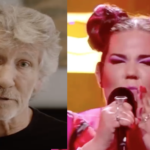 Letter including signatures of Roger Waters and Ken Loach, calls to boycott the 2019 Eurovision Song Contest, scheduled to be held in Israel, ‘until Palestinians can enjoy freedom, justice and equal rights.’

Over 100 artists from around the world are calling for a boycott of the Eurovision Song Contest, due to be held in Israel on 2019. In a letter published by the Guardian on Friday dozens of musicians, actors, filmmakers and directors said they support Palestinian artists’ boycott of the contest since Israel “violates Palestinian human rights.”

“Until Palestinians can enjoy freedom, justice and equal rights, there should be no business-as-usual with the state that is denying them their basic rights,” the letter reads. Continue Reading »

But the Canadian celebrity journalist’s latest movie puts the lens on a topic that transcends Hollywood: contemporary antisemitism. The film, Wish You Weren’t Here, premiering next week in Canada, focuses mostly on musician Roger Waters, who has become one of the most vocal and visible supporters of the boycott Israel movement. Pink Floyd’s ninth studio album, from 1975, was titled Wish You Were Here. Continue Reading »

Pink Floyd founding member Roger Waters, vocal activist for the BDS and Israel’s demise, is now the subject of a documentary film being made by an award-winning filmmaker and New York Times bestselling author.

As the de facto international spokesman for the anti-Israel Boycott, Divestment and Sanctions (BDS) campaign, Waters’ contempt for Israel and the Jewish people is often on full display at his concerts, which feature visuals such as a flying pig emblazoned with a Star of David and anti-Israel rants. Continue Reading »

El Al Israel Airlines said it promptly canceled a promotional package that appeared on its website for an August concert in Budapest by Pink Floyd band member Roger Waters—a vocal activist in the Boycott, Divestment and Sanctions (BDS) movement against Israel—when it learned of the “sensitive issue” on Wednesday.

“This matter was brought to my attention yesterday afternoon,” Sheryl Stein, an advertising/public relations/social media manager for El Al, wrote in an email to JNS.org Continue Reading »