The five perpetrators admitted under investigation to hurling the firebombs at the homes of Jewish families on several different occasions because they “hate Jews,” as they put it. Continue Reading »

Israel’s army says the dead roadside-terrorist was among a group of 3 throwing stones & firebombs at Israeli cars near Hebron, and has ordered an investigation into the incident.

Early on Monday morning IDF forces shot and killed a Palestinian near Hebron who was part of a group throwing firebombs and stones at passing Israeli drivers. 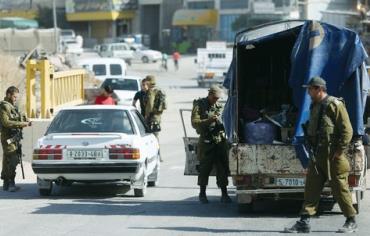 The incident occurred west of the village of Samu near Hebron.

The IDF said that the deceased was among three masked man who were throwing the objects at the drivers. Continue Reading »

Palestinian Arab youth hurled several firebombs at a night club in Jerusalem’s French Hill neighborhood on Saturday night. One of the flaming projectiles hit just outside the door of the establishment, but failed to cause any injuries.

Late last week, a Jewish motorist was attacked with stones and bricks in the same neighborhood. Police and local residents have noted an increase in Arab attacks of late.

In other violence, a Palestinian Arab man was arrested at the entrance of the Jerusalem-area suburb of Ma’aleh Adumim on Friday afternoon after police found him to be in possession of a large knife. Continue Reading »

A “third intifada” may not have been officially declared, but conditions on the ground resemble those of the “first intifada” in the patterns of violence and the daring exhibited by the attackers.

The Palestinian Authority encourages what it terms “resistance” or “struggle” – adding the term “by peaceful means.” This is doublespeak, however, for struggle that includes severe violence, and the use of rocks and firebombs with intent to cause severe injuries or death among Israeli civilians and security forces. Continue Reading » The indictment states that the seven youths attacked the car in which toddler Avigail Ben-Tzion was traveling, along with her mother and siblings, in a brutal attack on November 28. Continue Reading »

In attempt at secure streets against attacks on Jewish motorists, IDF operation lead to 21 arrests this past week for ‘road terror’ attacks.

The increasing frequency of rock and firebomb attacks targeting Israeli motorists in Judea and Samaria has led the IDF and police to crack down on “road terror.”

This week, 21 Palestinian Arab suspects were arrested on suspicion of throwing rocks or firebombs. Sixteen remain in custody following questioning, while five who were detained in the Binyamin region, north of Jerusalem, were later released.

A statement from the Israel Police said, “Police in the Judea and Samaria district, in cooperation with the IDF, will keep working to reduce rock attacks as much as possible.” Continue Reading »

Israeli couple barely managed to escape their car before it was completely engulfed in flames.
They suffered light to medium burns all over their bodies.

An Israeli couple, a husband and wife, have suffered light to medium burns all over their bodies after a Molotov Cocktail was hurled at their car this morning (Friday) outside of the Gush Etzion village of Tekoa.

The wife suffered moderate burns; the husband was also lightly injured. Both were taken into custody by Magen David Adom medics and transferred to Hadassah Ein Kerem Medical Center in Jerusalem. Continue Reading »

MK Orit Struck reported the bus she was on from Jerusalem to Hebron on Monday night, was hit by 5 firebombs thrown by group of PA Arabs.

MK Struck: IDF must admit terrorism is on the rise in Judea & Samaria.

Habayit Hayehudi MK Orit Struck had a frightening experience on Monday night when firebombs were thrown at the bus she was traveling on from Jerusalem to her home in Hebron.

A Palestinian prepares to throw a firebomb [Illustrative] – Photo: Reuters

Struck said that five firebombs thrown by a group of Arabs hit Bus No.

A group of 4 young would-be terrorists were nabbed by alert IDF soldiers just minutes before they could throw their homemade firebombs at nearby passing Jewish drivers.

Soldiers caught four young terrorists on Wednesday night, just moments before they could attack Israelis on a nearby highway.

The dramatic capture took place in the Hevron Hills in the Judea region, south of Jerusalem.

Soldiers with the Kfir Brigade noticed four suspicious figures hiding near a heavily used junction. They approached the four, who attempted to escape into the nearby Arab town of Kfar Awa. The soldiers were faster, and managed to apprehend them. Continue Reading »

The United Nations Relief and Works Agency (UNRWA) stated that one of its employees, 34-year-old Rubin Ziad, was among the three killed in clashes between IDF forces and residents of the Qalandiya refugee camp in the vicinity of Jerusalem on Monday.

The statement said that sources revealed that the man was on his way to work and was not involved in any violent action. It was also stated that another UNRWA employee was shot in the leg during the clashes, and is currently in stable condition. Continue Reading »

Security Chief to stone-throwers: ‘silk glove treatment is over.’

The IDF is increasingly determined to stop Palestinian Authority-resident Arabs’ attacks on Israeli communities, and is willing to use live fire if necessary, says Yehuda Dana, security chief for the Beit El region.

Speaking to Arutz Sheva, Dana said there has been an escalation in Arab attacks on Israeli civilians in recent months. “Their brazenness has crossed the line – they are doing what they didn’t do for years, like reaching the fence of an Israeli community and throwing rocks into the community, causing injuries,” he related. Continue Reading »

1 Palestinian terrorist killed after IDF soldiers open fire at 2 Arab terrorists who threw firebombs at them in northern Samaria.

IDF soldiers opened fire on Wednesday night at two terrorists who approached an IDF position near the community of Einav in northern Samaria.

As the two terrorists approached the soldiers, they hurled a firebomb at them. The soldiers returned fire, killing one terrorist and wounding the other.

PA officials told AFP that the killed terrorist was a 16-year-old teen, identified as Amer Nassar.

The latest attack comes after two days of unrest in Judea and Samaria, as Palestinian Authority Arabs rioted over the death of an elderly terrorist who was serving time in an Israeli jail. Continue Reading »