A top French counter-terror expert dropped a political bombshell Wednesday saying “we need to have administrative detention” and adding that he will visit Israel’s detention center at Ofer Prison as a potential future model.

The official, French opposition MP Georges Fenech made the surprising comments at the IDC Herzliya Conference on Counter-Terrorism on the university’s campus.

Fenech, who heads the French Parliamentary Special Commission into terror attacks in France, said “I know as a judge that it is hard” to reduce civil liberties. Continue Reading »

Egyptian source reports infantry deployment was coordinated with Israel because of the growing threat from Sinai militants.

Egypt has deployed a new infantry battalion in the Taba area of Sinai, south of Eilat, in a bid to prevent possible attacks on the Israeli resort city or on air traffic headed there, Egyptian sources said.

The deployment was coordinated with Israel.

The Egyptian forces will be stationed particularly close to the Israeli border, compared with previous Egyptian deployments to which Israel has agreed.

Israel has consented to such deployments several times over the last few years even though it is expressly prohibited by  the military appendix of the 1979 peace treaty between Israel and Egypt. Continue Reading »

The 2 Iranians were arrested after bomb destroyed their Bangkok apartment less than a km from the Israeli embassy.

Two Iranian men were convicted Thursday of taking part in a botched bomb plot that was exposed last year when an accidental explosion blew apart the Bangkok villa where they were staying.

Israeli and Thai officials have said the plot was aimed at Israeli diplomats in Bangkok, the capital, though Iran denied the allegations and neither defendant was charged with terrorism or attempting to kill Israelis. Continue Reading »

The terrorist attack at last week’s Boston Marathon was unprecedented for the city’s doctors – but they were prepared, thanks to Israel.

Minutes after a terrorist attack killed three at the finish line of the Boston Marathon, doctors and nurses at the city’s hospitals faced a harrowing scene – severed limbs, burned bodies, shrapnel buried in skin.

For Boston doctors, the challenge presented by last week’s bombing was unprecedented – but they were prepared.

Many of the city’s hospitals have doctors with actual battlefield experience. Continue Reading »

Special Police Unit uncovers weapons cache at kindergarten, school for special needs students.
The police believe that the weapons were likely intended for criminal use.

Anti-tank missiles and rocket-propelled grenades were found stashed in a school and a kindergarten for special needs children in the Galilee village of Abu Sanaan, during a raid by police on Tuesday morning. 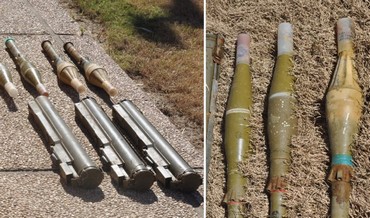 Pictures put out by police show three LAW missiles and four RPGs, all of which were recently stolen from IDF weapons depots. The arms were found in a drainage canal and a small pond on the ground of the school and kindergarten, along with raw explosives, grenades, and hundreds of assault rifle bullets.

2 Jews are accused of supplying stolen explosives to a pair of Arab brothers who planned a rocket strike against Israel.

Two Bedouin Arabs and two Jewish accomplices have been charged with planning a terror rocket strike on Israel.

The Shin Bet and the Negev Central Unit of the Israel Police arrested two Bedouin brothers, Mahmoud Abu Quidar, 25, and Sameh Abu Quidar, 22, in recent weeks. The two have admitted to being in contact with terror elements in Gaza and abroad, preparing explosive charges and attempting to build rockets for launching at Israel.

Two additional suspects in the case are Jewish Israeli citizens, one of them an IDF soldier, who supplied the main suspects with weapons stolen from the IDF, which were used in preparing the explosive charges. Continue Reading »

Descendents of Haj Amin al-Husseini, who led terror attacks on the Jewish community in Mandatory Palestine and collaborated with the Nazis, seek to keep site of old Shepherd’s Hotel from being used to house settlers.

The descendents of Haj Amin al-Husseini, who led terror attacks on the Jewish community in Mandatory Palestine and collaborated with the Nazis while serving as mufti of Jerusalem, would like to build a peace and coexistence center for Arabs and Israelis on land the mufti owned.

The family is seeking, at least in part, to keep the land from being used to house settlers. Continue Reading »

Azerbaijan authorities have arrested 22 people suspected of plotting to attack the Israeli and American embassies in the capital Baku, AFP reported on Wednesday.

Iran’s Revolutionary Guards was reportedly behind the plan to attack Israeli and U.S. targets in the country, according to Azerbaijan’s national security ministry.

A month ago, the national security ministry said it had arrested several activists belonging to the Iranian intelligence service and Hezbollah. The operatives were suspected of planning terrorist attacks against foreigners in Baku.