By Benny Toker and Elad Benari

Deputy Transportation Minister Tzipi Hotovely (Likud Beytenu) on Tuesday said it was time to “change the rules of the game” following the murder of the three Israeli teenagers by Hamas terrorists.

Speaking to Arutz Sheva, Hotovely said that increased construction in Judea and Samaria and targeted killings of terrorists were no longer sufficient as responses, adding that it was time to impose a death penalty on terrorists.

“This is the first incident to come out of Judea and Samaria after the Hamas and Fatah unity. Continue Reading »

Israel bombed dozens of targets in the Gaza Strip on Tuesday, striking at Hamas after finding the bodies of three missing teenagers — Gil-ad Shaer, Eyal Yifrach and Naftali Frenkel — whose abduction and killing it blames on the Palestinian Islamist group.

Israel’s security cabinet, which held an emergency session late on Monday and was due to meet again on Tuesday, was currently split on the scope of any further action in the coastal enclave and Judea and Samaria, officials said.

Free lifesaving Israeli phone app will set in motion emergency distress alert with a simple swipe of your finger.

Following the tragic murders of the kidnapped youths, 60,000 Israelis have already downloaded the one-swipe emergency alert application that was recently offered free to the public by the volunteer rescue organization, United Hatzalah (UH).

Parents are urged to download the lifesaving app called SOS, which could prevent future abductions, said UH founder and president Eli Beer. With one simple swipe of the finger, SOS subscribers can inform the non-profit organization, which has an active switchboard around the clock, that they are in distress and give the security forces permission to track their exact location using patented GPS technology. Continue Reading »

Some Police officers were dismissed & may possibly be fired after release of emergency police call from kidnapped Gil-Ad Shaer, shortly after his abduction.

Israel Police on Tuesday released a recording of the emergency call made by Gil-Ad Shaer shortly after his abduction in the West Bank on June 12, whose bodies were found Monday near Hebron.

These are the most dramatic moments in the kidnapping of the three Israeli teens – Naftali Frenkel, Gil-Ad Shaer, Eyal Yifrach.

One of the Abducted Jewish Teens Resisted the Arab Kidnappers

Walla news site reports: Forensic evidence suggests 1 of the abducted boys put up a ‘meaningful resistance’ to his kidnappers.

Forensic findings on the body of one of the three teenage boys abducted and murdered on June 12 show that the boy put up “meaningful resistance” to his attackers, reported news site Walla on Tuesday, citing a source who was involved in the process of identifying the bodies of the teens.

According to an IDF source, after the boys entered the abductors’ vehicle at the Alon Shvut intersection at Gush Etzion, the vehicle traveled west, then made a U-turn toward Hevron. Continue Reading »

Reiterating Obama, the State Department urges restraint on both sides.

Chairman of House Foreign Relations C’tee  says US should be under no illusion that unity gov’t wants peace.

By JPOST.COM STAFF, MICHAEL WILNER
NEW YORK — The United States issued a measured response to the murder of three Israeli teenage boys on Monday, two weeks after the students first gripped the heart of the Jewish nation, and hours after Israel Defense Forces found the missing – Naftali Fraenkel, Eyal Yifrah and Gil-Ad Shaer – dead in an open field. 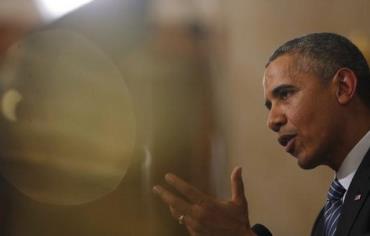 In a statement issued to the press, US President Barack Obama balanced a message of empathy as a father with a call for restraint from a leader familiar with spiraling conflicts in the Middle East.

Netanyahu Decrees: ‘Hamas Will Pay’ for the 3 Boys’ Murder

Netanyahu, ‘Revenge for the blood of a teenager or young man is not the devil’s work, Hamas is responsible, Hamas will pay.’

“With a heavy heart, we have found tonight three bodies, and all of the information we have indicates that these are the bodies of the abductees – Eyal, Gilad, and Naftali,” Netanyahu began.

“They were murdered in cold blood by human animals,” he said. Continue Reading »

The bodies of the three Israeli teenagers who were kidnapped over two weeks ago were found by security forces in a field northwest of Hebron on Monday afternoon. 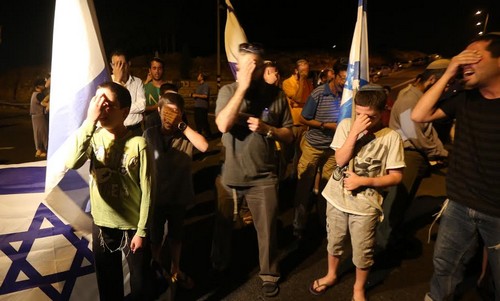 The discovery came after the Shin Bet focused its efforts in the area over the past two days during searches for the three abducted Israeli teens, who were abducted from a hitchhiking point in Gush Etzion. Continue Reading »

Israel’s note attached to the candy reads, “Ramadan Kareem. Here are some sweets because Hamas is making life bitter in the West Bank.”

The Israeli army handed out lollipops and matchboxes with anti-Hamas messages written on them to Palestinians as they continued their search for the three missing Israeli teens, Palestinian media reported Sunday.

“Ramadan Kareem. Here are some sweets because Hamas is making life bitter in the West Bank,” the note reads. Continue Reading »

By Lilach Shoval and Daniel Siryoti

Security forces operating in the Hebron area arrested 16 Palestinians overnight, and according to military sources 136 sites were searched.

“Both of these countries have the audacity to stand here & accuse Israel of human rights violations… Unbelievable!” Israel’s UN envoy Prosor said, reminding the UN that “one created Hezbollah & the other created al-Qaeda” and both are right now “fighting a proxy war in Syria,” killing thousands.

The UN Security Council on Thursday rejected another attempt of Arab and Muslim countries to condemn Israel’s military operation in the West Bank to find the abducted Israeli teenagers.

A petition from a coalition of Iran, Saudi Arabia, Kuwait and Qatar was raised during a closed discussion of the UN Security Council. Continue Reading »

Shin Bet says both men became wanted as soon as security forces learned of the kidnapping.

By YAAKOV LAPPIN
The Shin Bet (Israel Security Agency) revealed on Thursday the identity of two of the main terrorists involved in the kidnapping of three Israeli youths this month.

The intelligence agency named Marwan Quasma and Amar Abu Eisha both Hamas men from Hebron, as the two principal suspects behind the kidnapping, adding that both men became wanted as soon as security forces learned of the kidnapping.

The Palestinian Knesset Member has been vilified in Israel for proclaiming the Arab abductors of the Jewish teens in the West Bank are not terrorists.

MK Haneen Zoabi (Balad,) who has been vilified in Israel for saying that the abductors of the three teens in the West Bank were not terrorists, was kicked out of a restaurant, Arutz Sheva reported.

Neither the name of the restaurant nor its location were provided, but the confrontation between Zoabi and the restaurant owner was captured by a cell phone camera.

Video: Listen to Racheli Frenkel’s Speech to the UNHRC

Racheli Frenkel pleads, “It is wrong to take children and use them as an instrument in any struggle. You are responsible for human rights.”

Racheli Frenkel, the mother of kidnapped teen Naftali Frenkel (16), addressed the United Nations Human Rights Council (UNHRC) on Tuesday, urging them to rally the international community to place pressure on Hamas to release the kidnapped teens. With her were Bat Galim Sha’ar and Iris Yifrah.

“I have come here today as a mother,” Frenkel said, tearfully. “Twelve days ago, my son and his friends were kidnapped on their way home from school. Continue Reading »

Hamas leader Khaled Meshaal: ‘The kidnappers must be saluted’

Hamas leader Meshaal: ‘We have no knowledge of the kidnapping but we applaud the kidnappers’.

Hamas leader Khaled Meshaal addressed for the first time Monday the kidnapping of three Israeli teens 11 days ago, saying Hamas has no information regarding the kidnapping. Meshaal also said: “If, indeed, any Palestinian group is behind the kidnapping, those who did it must be saluted.”

In an interview with Al-Jazeera Meshaal, who lives in Qatar, said he “congratulates whomever kidnapped them [the teens] because the Palestinian prisoners should be released.” Continue Reading »