WATCH: The IDF’s ‘Eitan’, the world’s most modern & protected APC is set to replace the aging American made M113 and comes complete with air conditioning, touch-screen monitors, a 30mm cannon, Trophy active protection system, and with top speed at 56mph.

The Ministry of Defense’s new wheeled armored personnel carrier (APC), known as the ‘Eitan,’ has finished its first round of operational testing with the Nahal Infantry Brigade, which will be the first IDF combat unit to make use of the new vehicle.

The Eitan is slated to replace the aging M113 APC, which has been in service since the 1970s. Continue Reading »

Watch: IDF soldiers perform drag show to the chagrin of their commander

A confrontation occurred between soldiers in the Dimona nuclear unit and their commanding officers because of an impromptu drag show the soldiers conducted after returning from Operation Protective Edge. 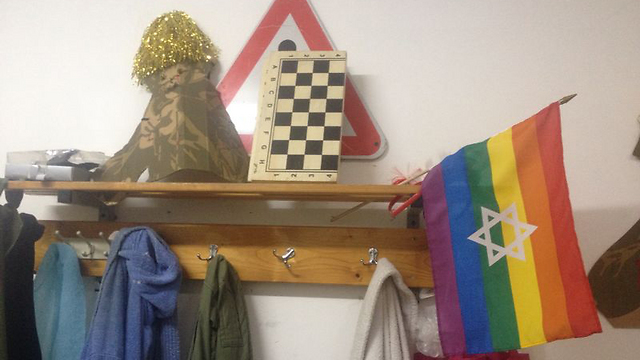 Soldiers in the Nahal Brigade were forced to remove this flag in their quarters.

The soldiers are part of the Nahal Brigade in regular service guard at the Dimona nuclear reactor, that were sent into Gaza during the recent operation. They decided to celebrate their return to the base with a show in which they dressed in drag, leading to a heated confrontation with their commander that was caught on video and sent to Ynet. Continue Reading »

Alert IDF soldiers foiled a terror attack on Sunday, when they caught six pipe bombs in the possession of two Palestinian Arabs.

The incident took place next to the Arab village of Huwara in the Shomron (Samaria). The head of the 931 Infantry Battalion of the Nahal Brigade, Guy Shadmi, told Arutz Sheva that soldiers identified two Arabs who were coming from the direction of Shechem and driving suspiciously.

“When they approached Har Bracha, the Palestinians threw a bag with a number of objects out of the car, at which point the soldiers stopped them,” Shadmi said, adding that after the Arabs were arrested and questioned, they admitted to having thrown six pipe bombs from their vehicle. Continue Reading »