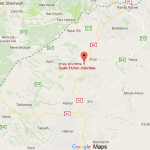 Referring to the newly opened mall in Gush Etzion, Knesset Member Moalem-Refaeli called on the Palestinians in the area “to come and see what the State of Israel can give you. Come and enjoy the Israeli economy.”

Politicians on Monday afternoon dedicated a new mall for settlers and Palestinians at the Gush Etzion junction, an area that has been a hot spot for terrorist attacks during the last year.

“The opening of this mall sends an unequivocal message to our enemies that you won’t break us,” said MK Nurit Koren (Likud).

Be the first to know – Join our Facebook page. Continue Reading » The terrorist tried to flee the scene according to reports, evidently after the soldier managed to fight her off, but IDF soldiers on patrol who were active in the area shot her and wounded her critically. Continue Reading »

In a move to surely render the EU, American administration and Abbas’ PA livid, Israel’s Civil Administration declared a parcel of 242 acres of land in Gush Etzion as government-owned land, signaling new construction in the near future.

After years of research and a number of High Court cases, the Civil Adminstration on Sunday declared a parcel of 980 dunams (242 acres) of land in Gush Etzion as state-owned land. The declaration of the parcel as state-owned land is the first step in developing plans for eventual home construction.