Oldest Ten Commandments to be auctioned in Beverly Hills with opening bid of $250,000 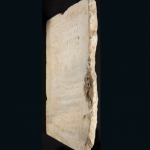 So that the stone tablet didn’t have 11 Commandments, taking God’s name in vain was replaced with new one commanding worship at Mount Gerizim.

The oldest stone inscription of the Ten Commandments discovered so far is being auctioned this week with an opening bid of $250,000 and the requirement that the owner must put the artifact on public display, CNN reported on Tuesday.

The oldest stone inscription of the Ten Commandments is being auctioned – Photo: Heritage Auctions

The tablet was discovered near Israel’s Yavneh during excavations for a railroad station in 1913 and is believed to be the only intact tablet version of the commandments. Continue Reading » 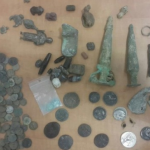 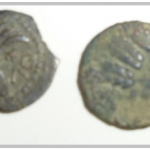 Ancient coins were confiscated from a kibbutznik antiquities dealer in northern Israel, who’s suspected of illegal sale of artifacts.

Agents of Israel’s Antiquities Authority along with police arrested an art dealer in northern Israel on Tuesday after finding over 3,000 ancient coins he obtained illegally, reported Israel’s Haaretz. 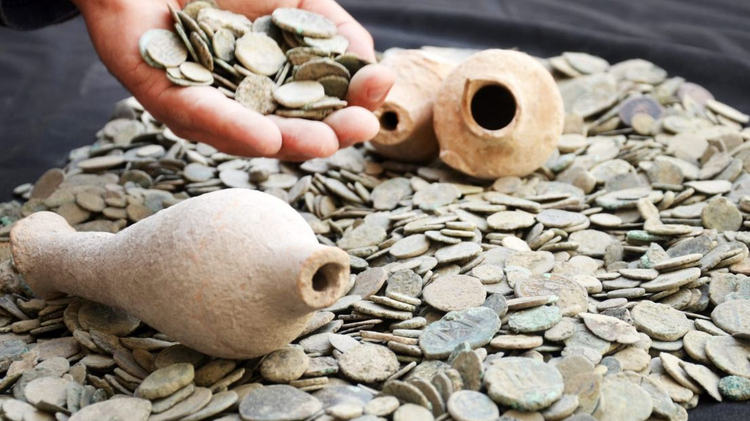 The coins, which have been valued in the tens of thousands of dollars, were found in the man’s home in Kibbutz Beit Hashita around 8 kilometers from Beit She’an, which was a major Greek city during the Hellenistic, Roman and Byzantine periods. Continue Reading » 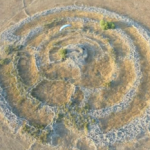 Weighing in at over 40,000 tons, the enigmatic concentric circles known as the “Wheel of Spirits” is made of thousands of basalt rocks that are some 5,000 year old.
• “We have bits of information, but not the whole picture,” admits an Israeli antiquities expert.

Driving past it, one of the most mysterious structures in the Middle East is easy to miss. The prehistoric stone monument went unnoticed for centuries in a bare expanse of field on the Golan Heights.

After Israel captured the territory from Syria in the 1967 Six-Day War, archaeologists studying an aerial survey spotted a pattern of stone circles not visible from the ground. Continue Reading »

‘They brought me nothing but aggravation,’ admits anonymous culprit in a letter he attached to the 2,000 yr-old Roman projectiles stolen 20 years earlier.

Museum robberies are rare, but rarer still is the thief who anonymously returns his prize. 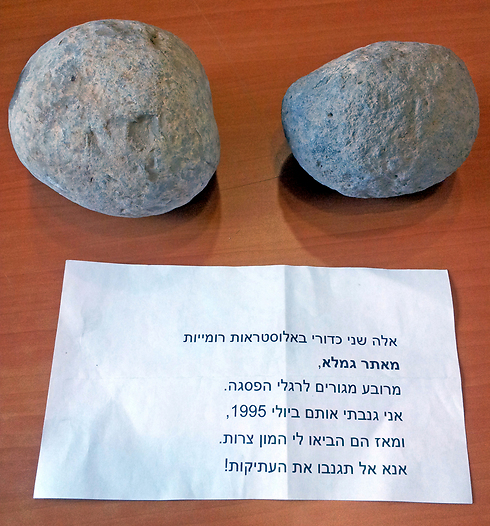 That’s exactly what happened Monday morning when two ancient projectile stones that were stolen from the Gamla Nature Reserve 20 years ago were found at the Museum of Islamic and Near Eastern Cultures in Be’er Sheva with a note from the culprit.

“These are the two Roman catapult balls from Gamla… I stole them in 1995,” wrote the thief. Continue Reading »

The Belfer collection, of over 350 rare artifacts are considered ‘among most significant private collection of antiquities in the world.’

US donors are giving the Israel Museum a collection of more than 350 artifacts “considered among the most significant private holdings of antiquities in the world,” the museum said Wednesday.

It said in a statement that “select objects” from the collection of New York art patrons Robert and Renee Belfer would go on show at the museum in Jerusalem from June, as part of its 50th anniversary celebrations.

“The Belfer collection features hundreds of ancient Greco-Roman and Near-Eastern glass vessels, recognized as some of the most impressive specimens of their kind, as well as important early examples of Greco-Roman sculpture in bronze, marble, and mosaic,” it said. Continue Reading »

The ancient texts that were found in an Afghanistan genizah estimated to be 1000 years old, include the writings of Rabbi Saadiah Gaon, will be unveiled next week.

The National Library will hold a special event next week to debut ancient texts found in an Afghanistan genizah, or storage area for old Jewish texts. The texts are estimated to be over 1000 years old and include writings from post-Talmudic Jewish leader Rabbi Saadiah Gaon.

Professor Hagai Ben-Shammai, academic director of the National Library spoke to Arutz Sheva Monday about the event, and revealed that thousands of texts were found in the genizah – some dating back to the first century CE.  Continue Reading »

Israel is to return stolen sarcophagus lids to Egypt

After lengthy negotiation, Cairo says Israel agreed to return 2 stolen sarcophagus covers that were found in Jerusalem’s Old City, back to Egypt.

Israel will return to Egypt two wooden artifacts that had been plucked out two ancient caskets dating to the Modern Kingdom, Cairo said Wednesday.

Inspectors of the Unit for Prevention of Antiquities Robbery foundparts of two stolen Egyptian sarcophagus covers in April while checking shops in a marketplace in the Old City of Jerusalem. 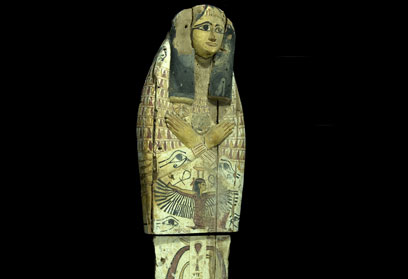 Hoard of jewels, silver and gold coins from Roman period uncovered at rescue dig carried out by Antiquities Authority in south

Worth its weight in gold: An impressive hoard of jewels, silver and gold coins from the Roman period was recently discovered at a rescue dig carried out by the Antiquities Authorityin the Kiryat Gat area.

The dig exposed the remnants of a structure from Roman and Byzantine times. When excavating near the structure’s courtyard the archeologists noticed a pit that was dug out and refilled.

To the archeologist’s surprise, the pit revealed an incredible treasure wrapped in cloth – scraps of which still remained among the findings. Continue Reading »