A Dozen Jews abducted, tied up & beaten senseless, according to one of the injured. ‘They tied our hands & legs, then beat us cruelly’.

Dozens of Jewish men were abducted and beaten in a mob attack in the Binyamin region on Tuesday afternoon. The men were set upon by an Arab mob, chased down, tied up and beaten senseless.

One of the men told Arutz Sheva about the vicious attack. The men were attacked as they were walking from the Jewish village of Esh Kodesh to the nearby Givat Hayovel.

Suddenly, they were set upon by an Arab mob, he said. Continue Reading » 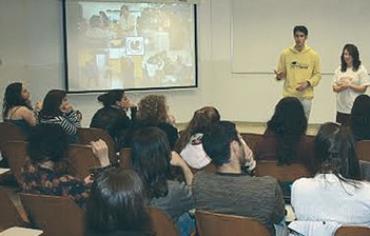 The initiative, spearheaded by the university-affiliated Yerushalmiot (Women of Jerusalem) and Hitorerut (Awakening on Campus), was created following a series complaints by Arab and Jewish female students of unwanted and crude advances by young Palestinian men. Continue Reading » The indictment states that the seven youths attacked the car in which toddler Avigail Ben-Tzion was traveling, along with her mother and siblings, in a brutal attack on November 28. Continue Reading »

Jewish Pilgrims Attacked by Arabs Next to Mount of Olives

By Uzi Baruch and Ernie Singer

A hareidi-religious family from New York was the victim of a serious attack by rioting Arabs Wednesday afternoon, asthey were making their way to pray on the Mount of Olives, east of Jerusalem’s Old City. One of the passengers

in their rented car was taken to Hadassah Mount Scopus Hospital with wounds to the head and one of his hands.

Area resident Nitai Shilo, who helped the family after the attempted lynch, told Arutz Sheva that the family, including children, got stuck in a big traffic jam next to the Mount of Olives. Continue Reading » Asaf and Naama Bruchi were travelling through the largely Arab neighborhood when their car stopped in traffic. Suddenly, they were pelted by rocks and other missiles, and found their car surrounded by Arab thugs. Continue Reading »

A female Arab terrorist attempted to murder an Israel Border Guard on Sultan Suleiman street in Jerusalem. The Arab attacked the officer with a knife outside a police station on the street. The officer fought back his attacker, and was lightly wounded. The terrorist was subdued by several officers near the building.

It was just the latest in a series of attacks by Arabs in Jerusalem, Judea and Samaria over the past few days, as PA Arabs showed their solidarity with Gaza Arabs, as Israel attacked terrorists and terror installations in Gaza during Operation Pillar of Defense. Continue Reading »

A Border Guard officer was stabbed Tuesday night when rock-throwers in the Arab Shuafat neighborhood of Jerusalem rioted.

A Border Guards officer was wounded Tuesday night when Arabs in the Shuafat area of Jerusalem rioted. The officer was stabbed by one of the rioters. At least seven other officers were injured by rocks thrown by the rioters.

Three of the officers, including the stabbing victim, were taken to a nearby hospital for treatment, as was the attacker who allegedly stabbed the officer.

Police and Border Guards were attempting to quell the riot. Police arrested a 17-year-old Arab rioter in connection with the stabbing. Continue Reading »

Jews Praying in Samaria are Ambushed by Arab Mob

An Arab mob ambushed & severely beat Jews praying in an open field in Samaria Wednesday, only leaving as soldiers arrived & shot into the air. The Arabs, from the Palestinian Authority village of Sinjil in the Binyamin region, have been arriving almost every day for several weeks to interrupt the Jewish prayers of residents from Givat Harel. The Jewish residents said they maintain their presence in the fields to prevent a hostile takeover of the state lands near their community, located between Shiloh and Harel in northern Samaria. Continue Reading »

An Arab terrorist attacked a Jew with an axe in  the area of the Damascus Gate Monday morning. The victim suffered light wounds.

Police have been deployed in a massive manhunt for the Arab. The wounded man is being treated at Hadassah Ein Kerem Hospital in Jerusalem. He reportedly was returning from morning prayers at the Western Wall.

Attacks on Jews have escalated in the past several months since the Palestinian Authority decided to bury the “diplomatic process” and then failed in its bid to win international recognition from the United Nations.