“Earlier today, an explosive device attached to multiple balloons was launched on a model airplane from the Gaza Strip into Israeli territory. Continue Reading »

The military said soldiers opened fire to break up a violent demonstration by several Gazans who were throwing rocks at soldiers and rolling burning tires at the border fence.

The Lebanese branch of Abdullah Azzam Brigades, the Al-Qaeda-linked terrorist group which claimed responsibility for Tuesday’s attack on Iran’s embassy in Beirut was initially established by Iran, according to a Middle East counter-terror expert. Tuesday’s attack in Lebanon left 23 dead, among them an Iranian attaché, and an additional 146 wounded. The blast reportedly was a message telling Iran and its Lebanese proxy Hezbollah to pull their forces out of Syria where they are supporting President Bashar Assad’s regime.  Continue Reading »

After having survived stabbing attack by two Palestinians, Kay Wilson tells how she then faced an equally terrorizing libel campaign by a relentless cyber-bully.

In December 2010, Kay Wilson found herself in the midst of a nightmare when she and visiting American Christian friend Kristine Luken were attacked by knife-wielding Palestinian Arabs in a forested area south of Jerusalem.

Kay Wilson on Step By Step: The Idiot’s Guide To Surviving A Machete Attack for TEDxBGU – YouTube screenshot Asaf and Naama Bruchi were travelling through the largely Arab neighborhood when their car stopped in traffic. Suddenly, they were pelted by rocks and other missiles, and found their car surrounded by Arab thugs. Continue Reading »

Violent Arab mob smashes windscreens of cars with metal rods & debris as frantic Jews make their getaway. – This is Jerusalem, 2013.

The text at the start of the video reads: “Destroying the settlers cars and arrests”, and claims to have been taken near Damascus Gate.

The account’s operators and the videographers claim the events are from Tuesday evening, and that the identities of the attackers had been blurred out to protect them from being identified. Continue Reading »

US feels betrayed after Israel backsteps out of terror suit

The White House & Congress upset at Israel’s decision to back out of trial against Bank of China for its involvement in laundering money for Hamas & the Islamic Jihad.

The reason for Israel’s retreat: China conditioned Netanyahu’s state visit on promise from Jerusalem not to testify in trial.

Now, the US is threatening to subpoena Israel’s Ambassador Oren

Israeli Ambassador to the US Michael Oren was called back to Israel to take part in an emergency meeting convened this weekend by Prime Minister Benjamin Netanyahu so that Oren could pass on  messages sent by the US administration and Congress in the wake of tensions between the two countries. Continue Reading »

According to a report published in The Guardian, the Islamist terrorist group spoke with France, the UK, Spain & others despite EU’s official policy of isolating it.

Hamas has been in closer contact with European governments despite Brussels’ official policy of isolating the Palestinian Islamist organization, according to a report which appeared in the British daily The Guardian on Friday. 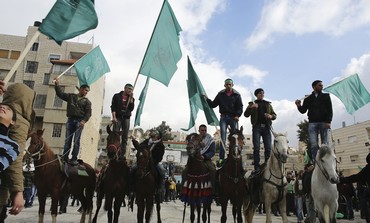 The newspaper quoted senior Hamas officials as saying that the organization which today rules the Gaza Strip has over recent months held back-channel discussions with numerous EU governments, including the United Kingdom.

There were no injury or damage reported.

The rockets exploded in an open area of the Eshkol Regional Council, causing no physical injuries or damages.

On Wednesday morning, the Color Red rocket alert siren blared throughout the city of Eilat shortly after 9 a.m. It is believed that terrorists fired three rockets at the city. No casualties were reported.

A spokesperson for the Israel Defense Forces said the rocket fire had been traced to Egypt’s Sinai Peninsula, a region which has become a hotbed of terrorist activity since the fall in 2011 of former Egyptian President Hosni Mubarak. Continue Reading »

Hamas Seeking Removal from US & EU List of Terrorist Organizations

Hamas says its removal from European & American lists of terrorism organizations is ‘only a matter of time.’

Gaza’s ruling Hamas terrorist group said on Monday that the group’s removal from the U.S. and European countries’ lists of terrorism organizations “has become a matter of time.”

Ahmed Youssef, one of Hamas’s leaders, told the Bethlehem-based Ma’an news agency, “There are contacts [being] made by the movement, with the help of Arab and Islamic countries such as Qatar, Egypt and Turkey, to convince major and European countries to take Hamas’s name out of the terrorism list.”

Youssef claimed that the contacts received positive responses from some European countries, without naming them, saying that visits from other Western countries are also positive signs. Continue Reading »

The Shabak has been conducting a wide-ranging and long-term investigation of this group; so far, about 30 terrorists have been arrested. Continue Reading »