City Municipality proposes handing out 2-year permits to businesses that ask to be open on Shabbat. Tel Aviv Deputy Mayor Assaf Zamir says, “We will not stop until we know we exhausted all possible avenues to preserve the city’s character as an open, liberal city.”

By Yehuda Shlezinger and Yori Yalon

The Tel Aviv Municipality has introduced a new proposal to allow grocers and supermarkets in Tel Aviv to remain open on Shabbat, after their original bylaw was rejected by Interior Minister Gideon Sa’ar in June.

“The proposal is part of city’s fundamental stance on preserving the character of Shabbat in the city, providing necessary services to residents as had been done for years.

Chances are, the incoming Shabbat on Friday night will be one Tel Aviv’s supermarket owners will never forget.

A store of the AM:PM chain in Tel Aviv. – Photo: Yehoshua Yosef

The Tel Aviv municipality distributed a advance notice on Wednesday to hundreds of small stores, kiosks, minimarkets and larger chain stores such as AM:PM, Tiv Taam and Super Yuda, warning them not to open their doors this coming Saturday.

Israel: 2,226 people were counted by Guinness, participated at Hangar 11, at the Tel Aviv Port, to set newest world record for largest Shabbat dinner ever.

Girls in miniskirts and high heels; rabbis in black hats and white Shirts; the revelry of the Gay Pride parade in the background – this is Friday night in Tel Aviv and a Shabbat for the record books. 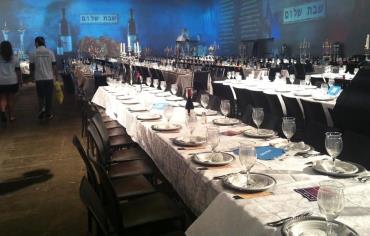 Exactly 2,226 people gathered at Hangar 11 at the Tel Aviv Port to participate in the record making largest Shabbat meal ever, organized by White City Shabbat, the Tel Aviv-based NGO that organizes public shabbat meals once a month at the Goren Synagogue on Modigliani Street, as well as other events geared toward the English-speaking and olim community that include holiday learning classes, chalah baking classes, and religious lectures. Continue Reading »

In an attempt to inspire world Jewry to connect to Shabbat in Israel’s largest city, a non-profit aims to host world record setting meal in Tel Aviv on June13th.

White City Shabbat, a non-profit organization dedicated to building Jewish life in Tel Aviv, has announced Monday that it will attempt to set the Guinness World Record for the World’s Largest Shabbat Dinner.

The dinner, which is scheduled for June 13, 2014, will be held at the Tel Aviv Port. The organization aims to host 1,000 people at the dinner, including Israelis, new immigrants, and public figures.

The hareidi resident of Petach Tikvah is suing for NIS 2.5 million after being forced to violate the Sabbath by the police, even though he was prepared to cooperate & walk to the Police Station.

A hareidi resident of Petach Tikvah is suing police for NIS 2.5 million, after police forced him to ride to a police station on Shabbat. The lawsuit is based on the man’s forced violation of the Sabbath at the hand of police, even though he was prepared to cooperate with police and walk to the station, which was a five minute stroll away, the man’s attorney said. Continue Reading »

Prime Minister Binyamin Netanyahu, his wife Sarah and members of the staff of the Prime Minister’s Office who are currently visiting Davos, Switzerland, chose to respect the Sabbath and walk back to their hotel from the Friday evening ‘kabbalat shabbat’ reception held in their honor by the Jewish community of Davos.

Netanyahu had been driven to the hotel that hosted the ceremony before the Sabbath began.

The walk was estimated at two kilometers in length. Continue Reading »

Britain’s employment minister said she would introduce new regulations to make Jews who refuse to work on Shabbat eligible for welfare benefits.