Israel’s Shin Bet arrest Hamas operative who confessed to his involvement in terror tunnel planning, attacks, and much more from Gaza.

The IDF revealed Tuesday that Israeli security forces had arrested a militant of the Hamas terror organization who was actively involved in plotting tunnel attacks from the Gaza Strip.

Shaer gave interrogators a plethora of detailed information regarding Hamas’ terror activities in Rafah, including how Hamas planned attacks during conflict and its intentions to use terror tunnels to carry out attacks against Israel civilians. Continue Reading »

5 IDF Soldiers Killed When Terrorists Attempted to Infiltrate into Israel

5 Israeli soldiers were killed when Hamas terrorists breached the border via a Gaza terror-tunnel on Monday. The deaths of the 5 soldiers brings the total killed Monday at 10.

A 6th soldier prevented the abduction of one of the bodies.

Five soldiers were killed when Hamas terrorists breached the border from Gaza near Kibbutz Nahal Oz on Monday, it has been cleared for publication.

A sixth soldier prevented the abduction of a body of one of the soldiers who was killed. He reportedly opened fire on the terrorists from the guard position he was in, when he saw them trying to drag a body toward the tunnel they emerged from. Continue Reading »

View clip of an infiltration by Gaza terrorists, who were killed by IDF forces in the Gaza Belt region.

Residents of the Shaar Hanegev, Sdot Negev and Eshkol regions near Gaza were told to stay in their homes Monday morning because of a terrorist infiltration. The IAF precision airstrike hits a Palestinian terrorist squad in Gaza as they prepare to launch a missile at Israeli civilians.

The IAF released footage showing a missile fired by an Israeli aircraft wiping out a squad of Gaza islamist terrorists as it was about to launch a rocket at Israeli civilians.

A moment before the IDF airstrike – Photo: Screenshot

IDF sources described the airstrike, noting that it had “intercepted terrorists during their final preparations to launch rockets towards Israel”.

From the Gaza side, Hamas-run health ministry spokesman Ashraf al-Qudra told AFP that “two Palestinians were hit and injured by an Israeli drone while they were riding on a motorbike east of Khan Yunis.” Continue Reading »

Security source: We wish to contain this, but Israel is prepared for Hamas escalation.

All eyes were on the Palestinian terrorist factions, to see how they would respond on Tuesday evening, after the IDF launched a large-scale retaliation in Gaza, to an unprovoked Palestinian cross-border sniper attack that killed a young Defense Ministry employee.

The attack marked Israel’s first casualty from Gazan terrorism since the end of Operation Pillar of Defense in 2012.

Luckily, no physical injuries or damages as Hamas allows Mortar shell to be fired by Gaza terrorists  into Eshkol Regional Council.

The mortar exploded in an open area in the Eshkol Regional Council. There were no physical injuries or damages.

Local residents said that the “Red Alert” siren which usually warns them about rocket attacks did not sound.

Several days ago, the “Red Alert” siren was heard in the Hof Ashkelon Regional Council and in communities in the Gaza belt. Continue Reading »

Gaza terrorists fired two mortar shells at the southern Negev early on Sunday afternoon. The shells exploded in the Eshkol region, but did not cause injury.

The military has advised agricultural workers in the area to seek shelter.

Recently, Hamas’ “military wing” has admitted to being behind an attempted attack involving a “terror tunnel” leading from Gaza to an Israeli kibbutz. Continue Reading »

Kibbutz members & KKL plant trees as a screen against terrorist snipers, shooting at Israelis living close to the Gaza border.

Trees are often used as a screen to block out undesirable views, but in Israel they’re about to be planted as a screen against rocket attacks on Israelis living close to the border with the Gaza Strip.

The IDF first used trees as a line of defense as the modern state of Israel was being established, but say they can be just as effective today.

On an Israeli kibbutz, members planted Eucalyptus saplings along the road leading to Nahal Oz.

Gaza-based terrorists opened fire on the Shaar Hanegev region in southern Israel. It’s the 2nd time in less than a week that Gaza terrorists have violated the Egyptian-brokered ceasefire agreement with Israel that was reached at the end of Operation Pillar of Defense.

For the first since the end of the IDF’s Pillar of Defense counterterrorism operation, Gaza-based terrorists opened fire on Friday afternoon towards the Shaar Hanegev region in southern Israel.

No one was hurt but a military vehicle belonging to a commander of the IDF’s Gaza Division sustained damage.

While Friday’s incident was the first time since November that shots were fired from Gaza towards Israel, it marks the second time in less than a week that Gaza terrorists have violated the Egyptian-brokered ceasefire agreement with Israel that was reached at the end of Operation Pillar of Defense. Continue Reading »

Have Israel’s Hands Been Tied by the Palestinians?

Egypt is far from being the only country to support the militant group. It is no longer a secret that Hamas is also backed by Iran and the Gulf states (particularly Qatar).

On Sunday, several foreign and Israeli news outlets reported that the radical Gaza-based group Hamas was preparing to take over the West Bank, determined to oust the current Western-backed Palestinian leader Mahmoud Abbas.

According to reports, the Islamists were emboldened by their recent war with Israel and the alleged victory that followed.

Militants claimed that Israel failed to cripple their ability (and will) to launch attacks against civilian targets, with some going as far as to suggest that Hamas left the battleground if not victorious, then at least stronger diplomatically. Continue Reading »

Hamas: Israel “has opened the gates of hell”

Shin Bet confirmed it had carried out the attack, saying it had killed Jabari because of his ‘decade-long terrorist activity’

By Barney Henderson, and agencies

Jabari, who is the most senior Hamas official to be killed since an Israeli invasion of Gaza four years ago, was killed in an air strike on a vehicle, in a dramatic resumption of Israel’s policy of assassinating Palestinian militant leaders.

Jabari has long topped Israel’s most-wanted list, the Associated Press reported, and was blamed for in a string of attacks, including the kidnapping of Israeli soldier Gilad Schalit in 2006.

Arabs in Gaza say terrorists have hit an IDF jeep with an anti-tank missile.

The jeep reportedly caught fire. It had been driving along the border between Gaza and Israel, opposite the Zeitoun neighborhood in central Gaza, east of Gaza City.

Voice of Israel public radio said the jeep belonged to the Givati Brigade.

According to an Arab report, the IDF responded with heavy tank fire at the eastern part of Gaza and at an area east of Khan Younis. Continue Reading »

NEW YORK – A federal judge on Tuesday threw out a lawsuit brought by a US man wounded in the Middle East who sought to hold Arab Bank liable for providing material support to the Palestinian group Hamas. 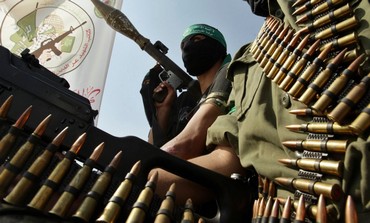 US District Judge Jack Weinstein in Brooklyn, New York, held that Mati Gill could not prove Arab Bank was responsible for injuries he sustained in 2008 from gunshots fired from Gaza into Israel.

20 Egyptian soldiers killed by local extremists who then reportedly tried to infiltrate into Israel. Dozens of rockets fired at Sderot area.

IDF forces exchanged fire with terrorists who fired mortar shells at Israel Sunday evening near Kerem Shalom, on the border with Gaza.

There was reportedly also an infiltration into Israel by an enemy vehicle during the exchanges of fire. The IDF reportedly hit the vehicle from the air and the terrorists in it were killed.

IAF aircraft attack a terrorist cell in Gaza as it prepares to launch rockets at southern Israel.

IAF aircraft attacked a terrorist cell in northern Gaza on Monday morning, as it was preparing to launch rockets at southern Israel.

The IDF Spokesperson’s Unit said in a statement that the aircraft scored a direct hit.

“The IDF will not tolerate any attempt to harm Israeli citizens and IDF soldiers and will continue to act decisively and strongly against anyone who uses terror against Israel,” said the IDF statement.

Despite an Egyptian-brokered “ceasefire” recently announced by Hamas, terrorists from Gaza have continued to sproadically fire rockets at southern Israel. Continue Reading »