Exposed faux pas recognized by State Department after learning that the US embassy in Saudi Arabia had ‘shared’ a video from the social media account of a private Saudi citizen, without realizing that ‘Israel’ had been edited out.
– WATCH clips, see if you spot the difference.

The State Department called the posting of a video by the US Embassy in Saudi Arabia that removed Israel from an announcement about the president’s upcoming trip to the region an “inadvertent mistake.”

On Monday, Rep. Eliot Engel, D-N.Y., criticized the State Department for “editing out” Israel in the video posted on the Riyadh embassy website and Arabic-language Twitter account. Continue Reading »

Sheik Hassan Nasrallah claims Saudi Arabia seeks to normalize ties with the Jewish State at the expense of the Palestinian Arabs.

“Saudi Arabia has taken advantage of the ailing Arab situation, only to build relations with Israel. The price will be at the account of the Palestinians,” he warned, in comments quoted by Lebanon’s National News Agency.

“This is free normalization with Israel and this will open the doors to other states than Saudi Arabia to follow suit,” added Nasrallah.

Unimpressed With US Promises About a Nuclear Iran, Saudis to Buy Pakistani Nukes

With Riyadh having said they would never be under threat of a nuclear Iran, Saudi Arabia has been negotiating with Pakistan on its acquisition of nuclear weapons.

Saudi Arabia is trying to purchase nuclear weapons from Pakistan, according to senior US officials. Saudi Arabia has expressed concerns over the way nuclear negotiations with Iran are being run. It has said that it fears the final agreement would allow Iran the capability of developing nuclear weapons, either by ignoring its obligations or by waiting a few years until the terms are over. Continue Reading »

The Washington Times reports the U.S. is likely to offer the Saudis its advanced GBU-28 bunker buster bombs, that so far is only provided to Israel.

The United States is likely to offer Saudi Arabia its advanced GBU-28 bunker buster bombs – so far only provided to Israel – as Washington seeks to beef up Saudi Arabia’s ability to lead Gulf countries in defending themselves against Iranian moves in the region.

According to the report in the Washington Times, Secretary of State John Kerry will propose the idea to Saudi officials on his visit to that country this week.
Continue Reading »
Category: Mid-East News | Tags: anti, bunker buster, GBU-28, Saudi Arabia, US Saudi Arabia
israelandstuffcom | March 30, 2015
No comments

The Saudi’s ‘United Arab Army’ is Targeting Iran, Not Israel

The Arab League has never been known for the unity that other international alliances have projected. NATO was a strong, American-led alliance throughout the Cold War (and in many ways still today); the European Union, for all its diversity, has a unified foreign policy. The Arab League on the other hand has been plagued by its members changing heads of state every few years or so in bloody revolutions. Continue Reading » 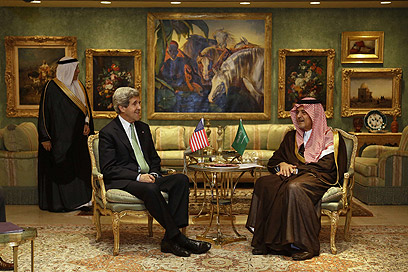 “I’ve always said whatever comes out of these talks, we will want the same,” said Prince Turki al-Faisal, who has previously served as head of Saudi intelligence and Riyadh’s ambassador to Washington and London but is no longer a government official. Continue Reading »

In an unexpected op-ed posted by the editor-in-chief of a fiercely anti-Israel newspaper, Faisal Abbas admits ‘this time’ Netanyahu is right, and Iran must be dealt with.

Al-Arabiya‘s English edition editor-in-chief Faisal J. Abbas wrote a surprising op-ed on Tuesday, calling on US President Barack Obama to listen to Prime Minister Binyamin Netanyahu after the latter addressed Congress on the dangers of an Iran nuclear deal being formulated.

Abbas, whose paper is openly anti-Israel and Saudi-owned, began by scornfully conceding “it is extremely rare for any reasonable person to ever agree with anything Israeli Prime Minister Benjamin Netanyahu says or does.

Top Saudi government-controlled paper says Israeli PM Netanyahu’s speech will serve Gulf interests “much more than the foolish behavior of one of the worst American presidents.” In an article in Monday’s edition of the Saudi daily Al-Jazirah (no relation to the Qatar-based television network), columnist Dr. Ahmad Al-Faraj comes out strongly against U.S. President Barack Obama. “I believe that Netanyahu’s conduct will serve our interests, the people of the Gulf,” he writes, “much more than the foolish behavior of one of the worst American presidents.”
Continue Reading »
Category: Mid-East News | Tags: Congress speech, Saudi Arabia
israelandstuffcom | December 21, 2014
No comments

In the Absence of US Restrictions on Iran, Saudis Slash Oil Prices to ‘Block’ Nuclear Weapon Investment

Israeli analysts agree, since the US is no longer curtailing Iran’s nuclear program, the  profound drop in oil prices due to the Saudis flooding market is seriously affecting Iran’s spending.

Oil prices have nosedived from $115 a barrel last August to under $60 a barrel by the middle of this month, with many analysts, in the wake of Arutz Sheva columnist and Middle East expert Dr. Mordecai Kedar, appraising that Saudi Arabia has intentionally caused the price drop as a weapon against Iran, over fears of a deal giving the Islamic regime nuclear weapons. American Rabbi: In “Dealing with Savages,” Arabs in Israel “must be vanquished”

JTA — The rabbi of a major modern Orthodox synagogue in New Jersey has written a blog post that calls for Israel to collectively punish Arab Israelis and Palestinians until they realize “they have no future in the land of Israel.”

Israeli Arabs waving Palestinian flags during a rally in the northern Arab-Israeli town of Sakhnin on March 30, 2013 commemorating the 37th anniversary of ‘Land Day.’

Saudi royal declined invitation by former Israeli intelligence chief to visit Jerusalem at a public talk in Belgium Monday, saying that the invitation was mere appeal to emotion aimed at distracting from the subject of the discussion – reaching peace based on the Saudi peace initiative.

Amos Yadlin, who headed the Israel Defense Forces’ Military Intelligence Directorate for four years until 2010, made the statement during a public talk in Brussels with Turki bin Faisal Al Saud, director of the General Intelligence of Saudi Arabia from 1979 to 2001 and the youngest son of the late King Faisal of Saudi Arabia. Continue Reading »

In the past, sources voiced concern that the Saudi missile’s main target is Israel, but due to the growing strategic rivalry between the Riyadh and Tehran, Iran has become the primary enemy. Continue Reading »

With no vaccine or anti-viral treatment for Middle East Respiratory Syndrome (MERS),  Saudi health authorities say the disease, which originated in camels, may simply die out.

A deadly virus that is spreading at record speed through Saudi Arabia could go global later this year when the 2014 haj (Muslim pilgrimage) begins, according to an article published by BuzzFeed.

The total number of confirmed infections of Middle East Respiratory Syndrome (MERS) has jumped by a third in the kingdom in the past week. Continue Reading »

Arab League’s total boycott of Israel was put into place back in 1948, although its enforcement varies from country to country.

Saudi authorities seized 140 kilos of persimmons from Israel at a local market near the border with Jordan, local media reported.

The fruit had Israeli stickers on it and was found in the city of Qurayyat, in northern Saudi Arabia.

The head of the municipality environment health department, Abdulaziz Al-Masaed, said that authorities acted on information that Israeli fruit was being sold in the market. Continue Reading »

Saudi Prince Faisal admits he was in contact with Israelis

“I want to clarify my perspective,” wrote Saudi Prince published in the Saudi newspaper of questions posed by Israelis at int’l conference in Munich.

Saudi Prince Turki bin Faisal sought to explain why he was in contact with Israelis at the Munich Security Conference last month in an article published on Thursday in the Saudi newspaper Al Riyadh.

Faisal said that when he is at international conferences, which are open to all, he sometimes is posed questions from Israelis in the audience – both government officials and ordinary citizens. Continue Reading »