In new video entitled “A letter to France”, Islamic jihadists declare: “The fighters of Islamic State are deployed everywhere and now the real war begins.”

By Erez Linn, News Agencies & Israel Hayom Staff
France is still in the crosshairs of the Islamic State: In a new video titled “A letter to France” the radical Islamist group warns it has an expansive network of operatives inside Europe working diligently to carry out more terrorist attacks, similar to those perpetrated in Paris in January.

“The fighters of Islamic State are deployed everywhere and now the real war begins. According to local police, the man was stopped and detained before he could carry out his plan to burn the flag.
Continue Reading »
Category: Jewish News, The Diaspora | Tags: arrested, France, French Police, Hyper Cacher, Israeli flag, Paris
israelandstuffcom | September 20, 2014
No comments

French President Hollande says a “solution to the conflict” between the Palestinian Arabs & Israelis will be put to the UN Security Council.

French President Francois Hollande said on Friday that a “solution to the conflict” between the Israelis and Palestinian Arabs will be put to the United Nations (UN) Security Council. “We will have a resolution, to be presented to the Security Council, that will say very clearly what we expect from the (peace) process and what the solution to the conflict must be,” Hollande told reporters in a joint news conference with Abbas. Continue Reading »

According to Bethlehem-based news agency Ma’an, Palestinian Authority (PA) chief Mahmoud Abbas will ask French president Francois Hollande to recognize the “state of Palestine” when Abbas meets Hollande in France Friday. According to the report, Abbas will then ask additional European countries to recognize “Palestine” even before he heads for the annual United Nations General Assembly.

PA foreign minister Riad Al Maliki told Ma’an that “the international situation now is much better than in the past, and there is a better chance that the Palestinian people’s demands will be met.” Continue Reading »

Habib noted in his letter that early in the Gaza war the French government “fully identified with Israel and its right to defend its citizens. …We prevented a number of anti-Israel and anti-Semitic demonstrations…in order to change France’s position in regards to Israel.”

French authorities are forbidding pro-Palestinian protests in some cities after violence marred a recent march against the violence in Gaza, as Jewish-Muslim tensions in France have reached their highest level in years.

A protester wearing a kaffiyeh and wrapped in a Palestinian flag raises his fist on July 13, 2014 in Paris, where anti-Israel protesters trap hundreds in Paris synagogue – Photo: AFP/ KENZO TRIBOUILLARD

Moderates on both sides called Wednesday for calm, and for a halt to fighting in the Mideast. Continue Reading »

A firebomb was hurled at a synagogue near Paris, part of a string of anti-Semitic incidents in Western Europe coinciding with Israel’s assault on Hamas in Gaza.

The firebomb went off Friday night at the entrance to the synagogue of Aulnay-sous-Bois, a northeastern suburb of the French capital, according to the National Bureau for Vigilance Against Anti-Semitism, or BNVCA. No one was hurt and the fire resulted in minor damage, Le Monde reported.

The French village of Le Chambon-sur-Lignon and its neighbors finally agreed to a memorial for saving over 1,000 Jews during the Holocaust.

The tranquility of the place is deceptive. The center of the small town of Le Chambon-sur-Lignon, in the heart of France, looks almost deserted. Green hills surround the town. Few cars drive down the main street that goes through it. On one side of the street is an old stone building, the church.

Across the street, on the brick wall of a building, is a sign with a line in Hebrew: “The memory of the righteous shall be everlasting.”

The Ministry of Diaspora Affairs is planning a 3-pronged program to encourage mass aliyah of  French Jews with a focus on jobs, education & housing.

The Israeli government has been planning a new program to encourage French Jews to make Aliyah, Maariv reports Friday.

The program, which will be implemented over a 3-year period, is intended to help French Jews emigrate to Israel on a large scale – following reports that French Jewry has been leaving en masse due to anti-semitism.

The program will also receive state funding, according to the report.

According to information gathered at the Ministry of Diaspora Affairs, tens of thousands of French Jews emigrated in 2013 to London, Canada and the United States. Continue Reading »

The city council of Bagnolet voted on Wednesday to make the incarcerated Lebanese terrorist, Georges Ibrahim Abdallah, an honorary resident.

PARIS — A suburb of the French capital honored a man imprisoned for helping to murder diplomats from Israel and the United States.

A majority of aldermen in the city council of Bagnolet east of the French capital voted on Wednesday to make the Lebanese citizen Georges Ibrahim Abdallah an honorary resident, calling him a “communist activist” and “political prisoner” who “belongs to the resistance movement of Lebanon, his country,” French media reported Friday.

BERLIN – Patrick Paoli, France’s Ambassador to Lebanon, hosted a dinner reception in early November for Hezbollah MPs and the political militia’s international affairs representative in which he honored the three Hezbollah members.

It is unclear if the ambassador violated EU sanctions outlawing contact with the military wing of Hezbollah. 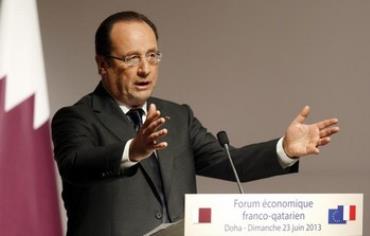 Hollande speaks during the opening of the Qatari-French Business Forum in Doha June 23, 2013.- Photo: REUTERS/Mohammed Dabbous

Hollande decided to speak to university students, not the Knesset, during his visit to Israel in three weeks, and Edelstein responded to the snub in kind.

“Whoever disrespects the Knesset does not deserve the Knesset’s respect,” Edelstein wrote on Facebook. The White House had signalled Thursday that President Barack Obama, guided by the “best interests” of the United States, was ready to go it alone on Syria after deadly chemical weapons attacks last week.  Continue Reading »

French Jewish immigration to Israel much higher from previous year

Jewish Agency anticipates about 2,500 French Jews immigrating to Israel in 2013, a 40% increase from last year.

The participation of young French Jews coming to Israel for long-term programs is also rising.

Around 800 French Jewish immigrants will arrive in Israel this summer on flights organized by the Jewish Agency.