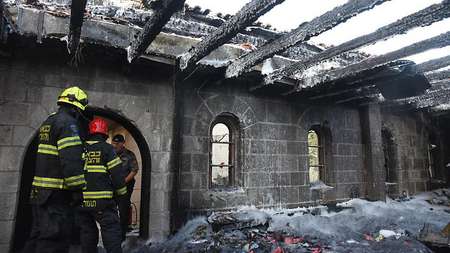 As Israel’s former ambassador to the US, Michael Oren, stated on several occasions, Israel has proved to be the one place in the Middle East where Christians can not only live without persecution, but can actually thrive.

It is no secret to the readers of Israel Today that a growing number of Israeli Christians, in particular a large group from Nazareth, are responding by volunteering to serve in the IDF and fully integrating with Israeli society as loyal and productive citizens. Continue Reading »

His comments came after Army Radio reported Tuesday a change in IDF policy which includes sending preliminary conscription orders to all Christian Arabs at the age of 16-and-a-half. Local Christian Arabs and pilgrims from around the world made their way down the cobbled Via Dolorosa in Jerusalem Friday, where Jesus is believed to have walked to his crucifixion.

Thousands of worshipers, some bearing wooden crosses, walked through the walled Old City to the Church of the Holy Sepulchre, the site where they believe Jesus was crucified and buried before rising from the dead three days later.

The city was also busy on Friday with Jewish worshipers celebrating the week-long festival of Passover, which commemorates the Exodus of the biblical Israelites from captivity in Egypt.

Israeli Arabic-speaking Christians to EU: Israel is Our Safe Haven

Israeli Christians demand that the world’s gov’ts stop wasting time demonizing Israel out of political agendas, and start focusing on the real problems by lifting “a finger against the ethnic cleansing of Christians in the Middle East.”

Some 150 Israeli Arabic-speaking Christians on Sunday demonstrated outside the European Union mission in Tel Aviv, demanding that the international community stop nitpicking against Israel and start combating the severe persecution of Christians everywhere else in the Middle East.

“Nations, organizations and international missions are quick to raise an accusing finger against Israel at every opportunity,” said Father Gabriel Nadaf, spiritual father of the Israeli Christian Recruitment Forum, which organized the rally. Continue Reading »

There are Arabic-speaking Christians who choose to embrace Israel, rather than fight against it with the Muslims. Many Christians across the region have been migrating or converting to Islam by force.

A growing number of Israeli Christians have been speaking out with a new voice and calling for integration into Israeli Jewish society. Continue Reading »