FM Liberman in reference to moving Israel’s border: There is no reason why Israeli Arabs (living on border with PA territory) “should not join their brethren under full Palestinian sovereignty and become citizens of the future Palestinian state that they want so badly.”

Foreign Minister Avigdor Liberman questioned the loyalty of some Israeli Arabs to the State of Israel on Wednesday in response to criticism over his recent statement about a possible future peace agreement with the Palestinians.

Liberman said his party would only support a peace treaty if there were territory and population transfers of Israeli Arabs into a future Palestinian state. Continue Reading »

Arab group’s legal council says Haifa University is denying its students freedom of expression & that in the past, flag didn’t lead to violence.

The University of Haifa banned Arab students from waving Palestinian flags during protests that took place earlier this week against the Begin-Prawer plan, causing reactions from NGOs for and against the decision.

Fady Khoury, a lawyer for Adalah, an Arab legal rights group, told The Jerusalem Post that the university is violating the principle of freedom of speech and should not act as a filter or interfere in the substance of expression. Continue Reading »

Some 45% of those killed in car accidents since the beginning of the year are members of the Arab community in Israel, a police report released Monday says. Even worse, half of the young drivers involved in fatal car accidents are from the Arab sector.

It was further reported that in the past five years, more than 500 drivers involved in car accidents were documented as driving under the influence of alcohol. Continue Reading »

While Israel remains unpopular among Arab countries, its locally produced HMO’s breastfeeding training videos have been watched by half a million Arab viewers world-wide so far.

VIDEO – In almost every Arab country, threats, curses or swears are heard when Israel is mentioned. But in this sea of hostility there is now a new ray of light: Breastfeeding training videos in Arabic by Clalit Health Services, an Israeli health maintenance organization, are gain tremendous popularity in countries which have mostly been fighting Israel in the past few decades.

The Abraham Fund Initiatives for Integration & Equality of Arab citizens organized a trip to N. Ireland for 15 Israeli-Arab community leaders.

By ARIEL BEN SOLOMON
The Abraham Fund Initiatives for the integration and equality of Arab citizens organized a trip last week for 15 Arab-Israeli community leaders to Northern Ireland, to learn from its police force. 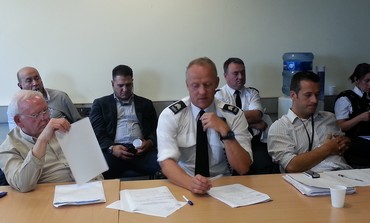 The goal of the trip was to expose the Arab-Israeli participants to the drastic reforms that took place within the police of Northern Ireland which now provide more equitable services to the minority community.

“The New Alliance” supports national service, entering the IDF & recognizes Israel as the home of the Jewish people.

“We are completely Israeli, and then comes religion,” says party founder Bashara Shlayan of Nazareth.

The events in the Middle East have unleashed deep sociological and ideological processes, of which we are only seeing the beginning. It is not only political Islam in the eye of the media storm. Throughout the various Arab countries in the region, the bruised and battered Christian community is raising its voice. Israel appears to be the only country in the region whose Christian community does not have a negative emigration ratio as its members flee West in pursuit of a more promising life.

Scores of Israeli Arab youths in the National Service participated in a Holocaust Memorial Day ceremony, then discussed the sad events and its relevance to Israeli Arabs.

Dozens of Arab youths in the National Service (Sherut Le’umi), who serve as counselors in the No’ar Oved Ve’lomed youth group (associated with the Labor Party), participated in a Holocaust Memorial Day ceremony on Sunday night. After the ceremony, the youths discussed the importance of the Holocaust to the Jewish people – and its relevance to Israeli Arabs.

Many of the youths had recently returned from a trip to Poland, where they visited the concentration camps and learned first-hand about the Holocaust. Continue Reading »

Israeli Arab who entered Syria to join rebel forces says they burned his passport & now refuse to allow him to return home.

An Israeli Arab who crossed the border from Turkey to Syria and joined the rebels fighting to overthrow President Bashar Assad‘s regime told his family he is having trouble returning to Israel because the rebels burned his passport. 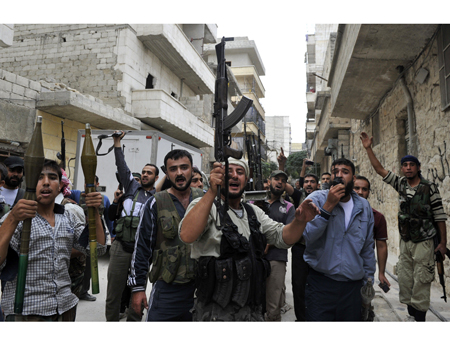 The man claimed the rebels told him “whoever joins us does not return to his family.”

A relative of the young Arab Israeli told Ynet, “He called me a month ago and said he and his friend were pleased with their move (joining the rebels). Continue Reading »

‘Samir’, a Muslim Arab from the Galilee, may hide his uniform & weapon from his neighbors, but is still proud to be an IDF combat soldier.

He is a combat soldier in the IDF, but when he goes home to his village in northern Israel, Samir (alias) has to change out of his uniform and hide his weapon. A Muslim Arab who chose to volunteer for army service, Samir and his family can expect nothing but hostility if his neighbors find out about his military career.

“I love the army,” he says. Samir, 26, serves in the Tavor battalion, one of the Home Front Command‘s search and rescue battalions whose men also perform combat activities in addition to their rescue efforts. Continue Reading »

‘124-year-old’ Arab-Israeli woman thanks Israel before she died

Mariam Amash, who according to Israeli registry was born in 1888, dies after being admitted to Hadera hospital.
Grandson: ‘She was the oldest woman in the world’ 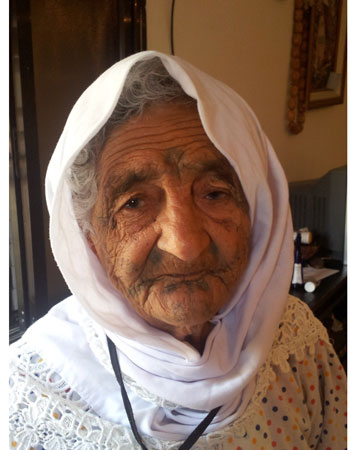 Mariam Amash of the Arab-Israeli village of Jisr a-Zarka died Saturday morning. According to the Interior Ministry’s population registry, she was 124 years old. The listing was based on a birth certificate issued by Turkish authorities who ruled the region at the time.

You can say that our lives were better before, but I still want to thank the Israeli gov’t for the help it has given us.

Bucking convention from his village of Arara, Yousef Juhja sent three sons to join the IDF—and one paid the ultimate price.

Yousef Juhja’s cell phone number ends, coincidentally, with the digits 1948. It’s the year of his birth and that of the Jewish state—and for most of Juhja’s fellow Israeli Arabs, the year of the Nakba, the catastrophe of national dispossession and the dispersion of their Palestinian kin.

Standing by the Memorial: Yousef’s son Sa’id fell in the line of duty, blown up by explosives packed in a tunnel dug by Palestinian terrorists under a sentry box in Rafiah, Gaza in December, 2004.

An Arab worker has sued over her firing for disrespecting the Memorial Day siren. Siren “hurtful to Arabs,” her lawyer says.

An Israeli-Arab woman from Taibe who was fired from her job at a supermarket in Raanana has filed suit against the Mega chain, Channel 2 reports. The woman says she was fired for refusing to stand in respect as a siren sounded in memory of fallen IDF soldiers – and claims that the expectation that she stand was offensive to her as an Arab.

Mega fired the woman, Haj Yahye, after a customer complained that she had not only not stopped in respect as the siren sounded, but had begun to sing. Continue Reading »